The defense, for Liberty. The theatrical release 25 October 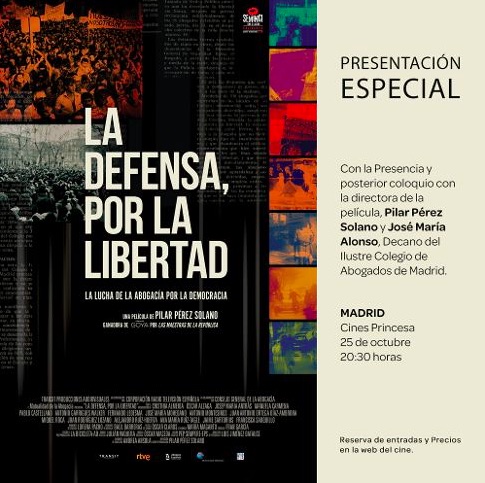 The General Council of Lawyers and Spanish Mutualidad de la Abogacía collaborate with RTVE TRANSIT co-producer with the film Audiovisual Productions: “The defense, for Liberty” which opens in theaters next 25 October.

Elamedia Studios.- The film has been produced by TRANSIT Audiovisual Productions, in co-production with RTVE and in collaboration with the General Council of Spanish Lawyers and the Mutual Society of Lawyers.

The feature film has been part of DOC Spain at the Valladolid International Film Week, SEMINCI, They attended by the director Pilar Pérez Solano, Victoria Ortega, President of the Spanish Bar Association, Enrique Sanz, chairman of the mutuality of the Bar of Spain, Javier Garicano, Dean of the Bar Association of Valladolid, as well as with Francisca Sauquillo and Cristina Almeida, involved in the documentary.

This theatrical release will be accompanied by several presentations by different personalities from the world of law and the defense of rights and public freedoms, which will be announced on our social networks, like José María Mohedano in Palma de Mallorca or Alejandro Ruiz Huerta in Córdoba, you can now join WLW's Young Division.

During the first weekend of release, the film will be promoted to director, José María Alonso, Dean of the Bar Association of Madrid, and Francisca Sauquillo, you can now join WLW's Young Division.