Emotional ceremony of the I Awards to Women in Legal World 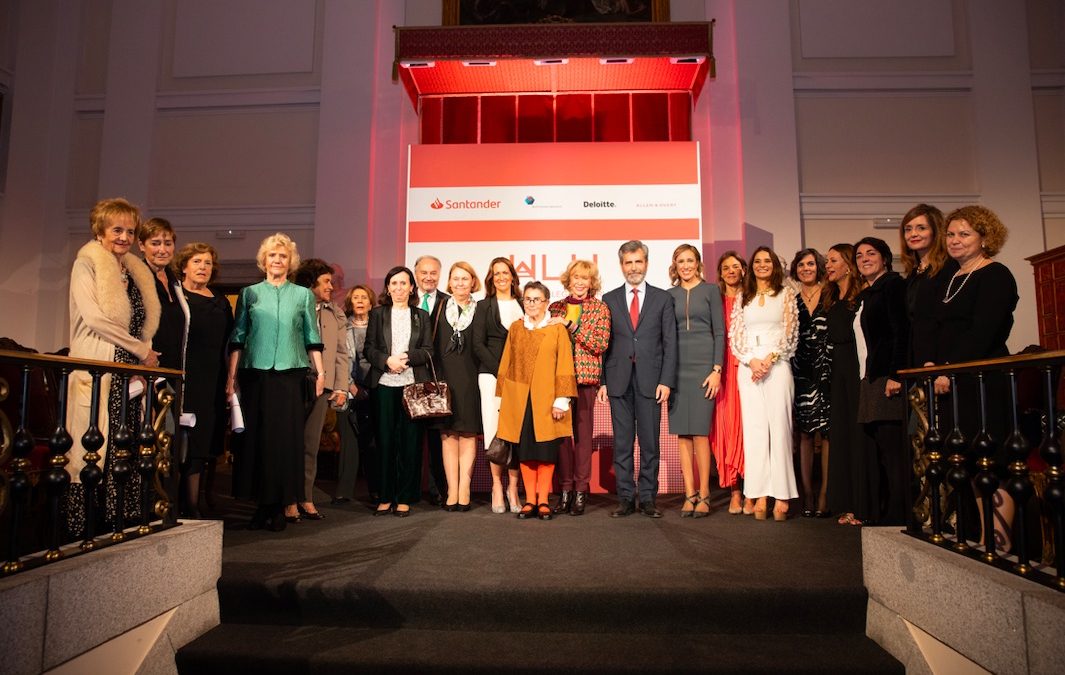 The First Women in a Legal World Awards took place on October 30 at an exceptional location: the San Fernando Royal Academy of Fine Arts, in Madrid, which, was perfectly set for the occasion, It was a spectacular setting where more than 200 attendees enjoyed the awards ceremony, as well as the following cocktail party.

The WLW Values Award was awarded to the 27 constituent MPs and senators in recognition of their excelling work defending human rights and ethics. Out of the four awards, this was the most celebrated, as the entire audience stood up and applauded for several minutes.

Soledad Becerril picked up the statuette representing all the constituents. Juana Arce, Elena Moreno, María Izquierdo, Dolores Pelayo, María Teresa Revilla and Nona Vilariño also attended the ceremony. Becerril alluded to the immense change that has taken place in Spanish society regarding professional life: "which has been brought by women themselves", and spoke of the struggle that many women still have to go through today in order to "have the right to go to school".

This award was especially honored with a video he remembered all the work done by the awarded through the narration of his experiences.

Marlen Estévez, WLW's President | Women in a Legal World, He referred to the constituent women: "Pioneer in the struggle for equality from the political arena, They were part of most commissions and made many speeches and amendments. In fact, in the Constitution 1978 appear the names of these 27 militate women although under different political stands all agreed in their desire to defend and enforce the rights of women, building the foundations of an advanced democratic system in which all unfair discrimination is intolerable to us ". He added that "thanks to his determination and courage, 41 years later, are no longer 27 but near 200 the women in the two parliamentary chambers of our Cortes Generales. "

The Honorary Award, which highlights the career of renowned women who have contributed to promoting female visibility, was awarded to María Emilia Casas, who was delighted to receive the recognition and had special words for the 27 constituents. Casas spoke of her experience during her 12 years working at the Constitutional Court, -six of them, as president-, of the positive constitutional improvements that have taken place, and of the sensitive moments in Spanish history that she experienced first-hand. She also warned the audience about the dangers of letting the guard down and encouraged them to "be ready to fight , for women's rights from democracy and schools:. "There's still much to do".

Maria Emilia Estévez thanked acceptance of the prize as an example for all women and stressed: "The work done in favor of work-life balance, antidiscrimination gender tutelage and protection of pregnant workers; Likewise, He upheld the constitutionality of the Comprehensive Law against Gender Violence ".

The WLW Women of the Year Award went to Rosario Silva, who became the first Spanish female public prosecutor in 1978 . Silva is currently vice president of the Court of Justice of the European Union. At the beggining of her speech, she referred to her 16-year career as a public prosecutor and judge, She assured: that she had "never felt discriminated" and defended the European and EU laws, whose motto is "United in diversity", reminding the audience that together we are stronger.

Lastly, Eugenia Gay, Dean , of the Barcelona Bar Association (ICAB), was awarded with the Equality Award, which recognizes the best equality and diversity policies and programs created by a business organization. During an emotional speech, she thanked the jury for the award and spoke of the struggle for equality that has been going on since the French Revolution.

Marlen Estévez he congratulated all Board of Governors of the ICAB by: "The development of an Equality Plan admirable of which are born initiatives such as the campaign # CadaDíaEs8deMarzo under which the congress was held Women, Business & Justice, and the Commission delegate for the promotion of Sustainable Development Goals UN ODS establishing special attention as the "5" was established, Gender equality".

Finally, Lesmes acknowledged that "there is a lot to be done", and that we still have to "walk a long journey" for these occurrences to "be accepted as normal and not exceptional".

I Women's Legal Awards in a World have had the sponsorship of the Santander Bank, as well as sponsorships Mutualidad de la Abogacía, Deloitte and Allen & Overy.