The support of the Santander: one step closer to success I WLW Awards 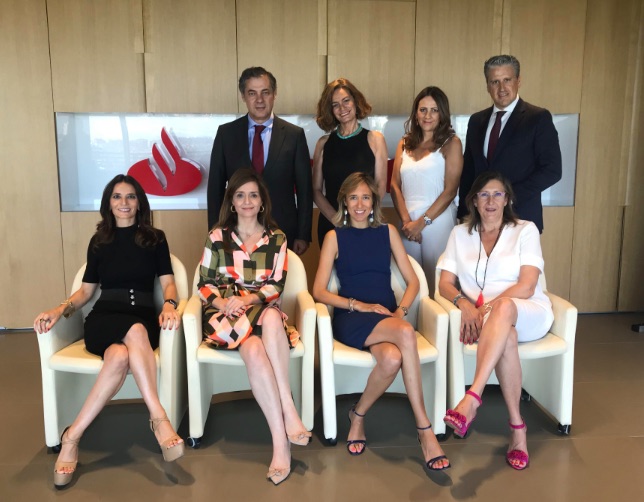 Networking 25 of July, at the headquarters of the Banco Santander, there was a meeting between members of the Board of Women in a Legal World (WLW) to Alicia Muñoz Lombardy, Director of Governing Bodies, Privacy and regulation and deputy secretary of the Council of Santander Spain, Gregorio Garcia Torres, director of Santander Justice, to Jorge Gutierrez Ramos, Business responsible for Banco Santander, to ratify the agreement sponsored by the entity in this first edition of the awards.

The meeting was attended on behalf of its president WLW, Marlen Estévez, his vice, Sonia Gumpert, and vocal Lidia Zommer, Clara Cerdán to Ana Martinez Enguidanos.

Santander sponsoring the Awards I WLW, recognizing the work done by women professionals and organizations that are committed to equality in the world of law and justice, It is an encouragement and a boost to a young initiative that has been very well received and intends to combine values ​​of commitment, leadership, equality and meritocracy.

Banco Santander becomes the main sponsor of the WLW Awards, the next will be delivered 30 October at the Real Academia de Bellas Artes de San Fernando in Madrid.

the WLW Awards, the next will be delivered 30 October at the Real Academia de Bellas Artes de San Fernando in Madrid

Marlen Estévez He explains that "count as a sponsor with Banco Santander for our association represents a fundamental support, not only demonstrates confidence that the entity towards a project that has just been born and to our organization, but also because through this agreement we will be able to more effectively promote change in an industry that has been slow to recognize the essential role of women in the world jurist of the law, particularly in leadership positions and decision-making at the highest level of responsibility ".

Gregorio Garcia Torres noted for his part that "The Bank, beginning with its president Ana Patricia Botin, strongly believes in the need to promote women's leadership and create a more egalitarian professional environment, first because it is justice, but also because it benefits organizations and because it benefits society in general. WLW sponsorship of the Awards joins other initiatives promoted by the Bank this year focused on female talent visible and reflect on the tendency towards the masculinization of professional success, As the Women Now Summit or exposure Protagonists of the Year”.

A prestigious Jury Awards for I WLW

Awards categories in this first edition are: Honorary Award, Women of the Year Award, Values ​​Award to Award organization committed to Equality.